AddictionPercent of population who are heavy drinkers

Health Canada’s Low Risk Alcohol Drinking Guidelines recommend a maximum of four standard drinks for men and three standard drinks for women on any one occasion, and a maximum of fifteen drinks per week for men and ten drinks per week for women.  These guidelines are intended to limit the amount of short- and long-term problems that can result from drinking.  In 2013-2014, according to the City of Hamilton’s Community Alcohol Report, 43% of Hamiltonians reported exceeding the Low Risk Guidelines, similar to the 44% provincial average.   According to the report, men, people with higher incomes and higher levels of education were more likely to exceed the guidelines.  Over 60% of Hamilton youth reported exceeding the guidelines which was the highest percentage of any age group.

A second data source, the 2015-2016 Canadian Community Health Survey, found 18.3% of Hamiltonians reported drinking more than five drinks on a single occasion at least once monthly in the last year, similar to the provincial average of 18.2%, and steady over the last decade.

Survey data from the Local Health Integration Network (which includes Brant, Niagara, Haldimand as well as Hamilton) found that of youth in Grades 9-12:

Provincially, the same survey found that nearly every single substance has experienced significant decreases among Ontario students between 1999 and 2017[1]

AddictionPercent of population who are daily smokers

According to the 2015-2016 Canadian Community Health Survey, 13.6% of Hamiltonians reported smoking tobacco daily, similar to the 11.9% provincial average.  This percentage is down substantially from a decade ago when 18.5% of Hamiltonians reported smoking daily, compared to 15.9% provincially.  The City of Hamilton’s Health Check 2018 found higher smoking rates in the lower city, among people with low incomes, and among lone parents.  Our Health Counts[2], a report by the urban Indigenous community, found 68% of urban Indigenous Hamiltonians smoke daily.

Among youth, smoking abstinence (those who never start smoking) has increased to 88% in 2013-2014[3] from 72% in 2003.  This translates into over 7,800 youth who will not start smoking because of this process[4].  However, youth vaping rates on the rise, and non-smoker youth who vape are up to five times more likely to initiate tobacco smoking.[5]

In Hamilton, between 2012 and 2017, emergency room visits for acute toxicity showed increases for all types of drugs except alcohol, which dropped slightly:

Deaths caused by opioid use have also increased dramatically.  In 2018, there were 103 deaths in Hamilton (with an additional 19 still under investigation and likely to be added).  This number compares to 37 deaths in 2012.  While comparative data for 2018 is not yet available, the 2017 Hamilton rate of opioid deaths (15.4 per 100,000 population) was higher than the provincial average (9 per 100,000 population). 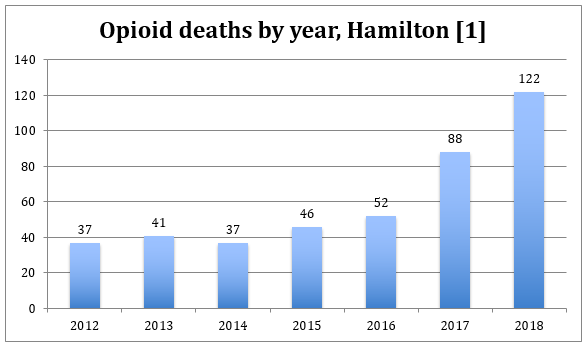 While local data is currently unavailable, a 2017 in-depth survey of high school students (grades 9-12) by the Centre for Addiction and Mental Health, found 18% of Ontario students report symptoms of a moderate to severe problem with technology overuse.  One in five (20%) students spent five or more hours per day on social media, up from 16% in 2015 and 11% in 2013.  Almost one-third (30%) spent five or more hours on electronic devices in their free time.

The survey also found that one-quarter of Ontario high school students play video games regularly, and 9% reported playing more than five hours per day.  One in eight (12%) reported symptoms of a video gaming problem, including pre-occupation, withdrawal, or disruption to family/school.  This percentage has remained steady over the past decade.