Just 34% of eligible Hamiltonians voted in the 2014 municipal election, a decrease from the 40% turnout in 2010. Turnout varied by ward: Dundas had the highest turnout at 44%, while Flamborough and downtown wards 2, 3, and 4 were all below 30%1. 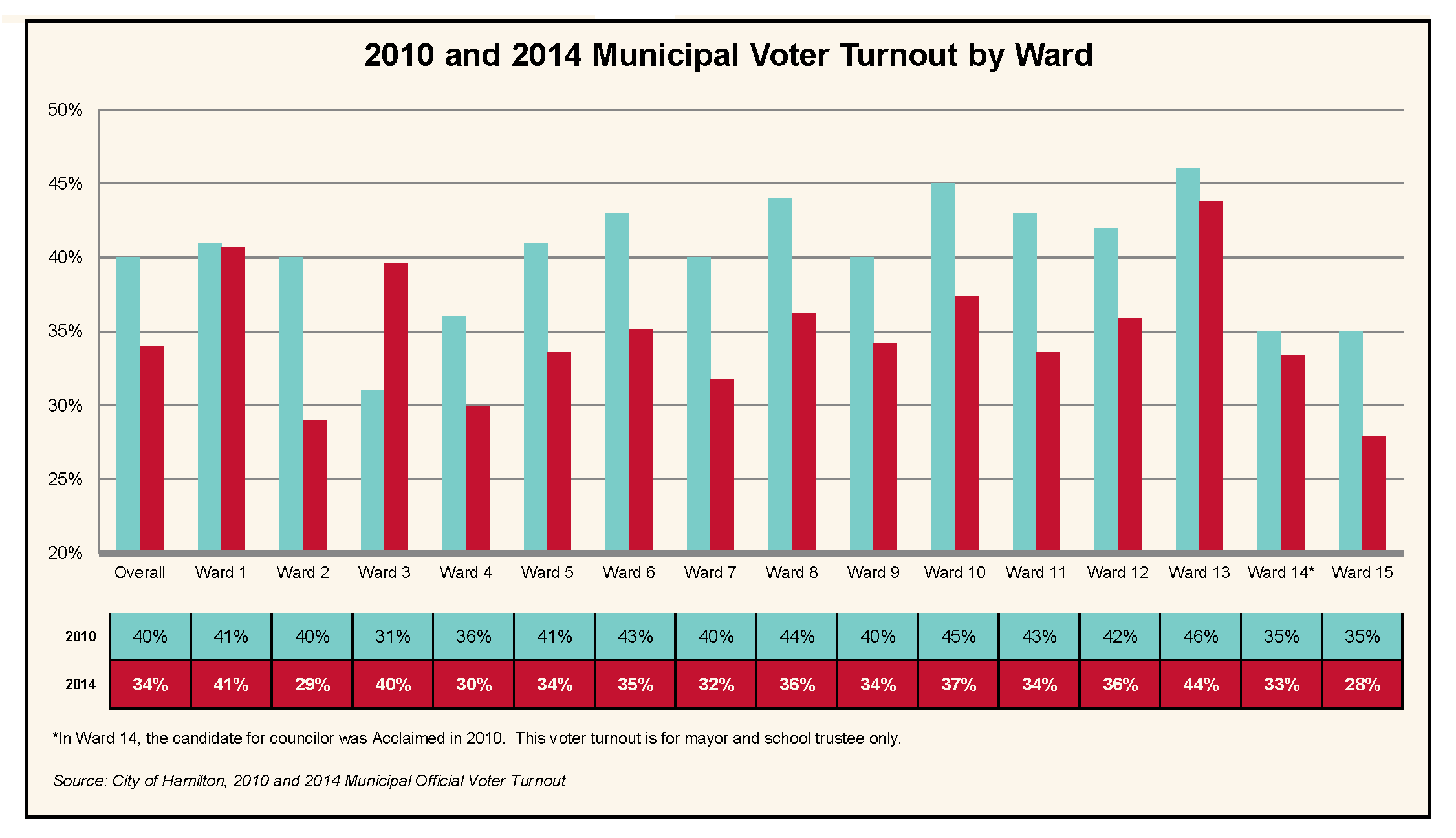 At 51%, voter turnout for the 2014 provincial election was slightly higher than the municipal results, and increased from the 48% who voted in 2011– both similar to provincial averages2. The 2015 federal election was a different story: the local turnout of 67% and the national turnout of 68.3% were the highest rates since 19933.

Voter turnout in Hamilton has been shown to vary by age, gender, and neighbourhood. The likelihood of voting increases as one ages, and women are more likely to vote than men4. In the most recent federal election, Hamilton voter participation varied widely by polling station: several polling stations had over 80% voter turnout, while others had below 30%.

National research shows that working age immigrants in Canada less than five years have a lower employment rate (70%) than working age non-immigrants (84%)6, often because they are upgrading language and other skills in these years. They are twice as likely to have a bachelor’s degree than the non-immigrant population (52% compared to 24%), and over three times as likely to have a master’s degree (17% compared to 5%)7. After being in the country for ten years, the gap in employment rates has closed: 82% for immigrants and 84% for non-immigrants8.

Citizens and EngagementDiversity in Leadership

A recent report by the EXCLerator project9 examined senior leadership and management positions for six Hamilton sectors: elected, education, public sector, corporate boards, voluntary boards, and health care. While women make up just over half the population, they were under-represented in every sector ranging from a low of 14% in corporate boards to 47% in the voluntary sector. Visible minorities make up 19% of Hamiltonians, but in leadership positions occupy a range of 11% to almost none across sectors.

Excerpted from the EXCLerator Report 2017. Hamilton data only.

Limitations: Not all institutions included public pictures for all their senior leadership positions. These results are based on those who do provide publicly available pictures.

Citizens and EngagementSense of Belonging

McMaster University researchers have found that sense of belonging varies by gender, age, neighbourhood, income, and physical and mental health11. In particular:

From 2012 – 16, Hamiltonians have donated an annual average of $208 million to charity. The percentage of Hamilton tax filers donating to charity (22.3%) remained slightly higher than national (20.5%) and provincial (21.5%) averages, but the percentage has fallen from 2012, when 24% of Hamiltonians gave to charity. Seniors over 65 are the most likely to give at just over 31%, and men are more likely to give than women (53% compared to 47%). The median amount given to charity was $340, with men making higher median donations than women ($360 vs $320 – also similar to national and provincial trends)12.

In 2015-6, 92% of Hamiltonians reported being “satisfied” or “very satisfied” with their lives. This percentage is slightly higher than the 89% average reported in 2005-6. It is similar to provincial and national averages13.