Fine particulate matter (PM 2.5) is a major component of outdoor air pollution and a known carcinogen and a main contributor to respiratory and cardiovascular diseases. PM2.5 comes from motor vehicles, industry and residential fireplaces and woodstoves. Over the past 17 years, it has been reduced by 26% – slower than many other air pollutants. Hamilton and Burlington continue to have the highest PM2.5 rates in Ontario.

Overall, air pollution in Hamilton has improved dramatically over the past two decades. As Clean Air Hamilton reported in its 2016 Annual Report, Hamilton’s air quality is about 90% better than it was in the 1970s. 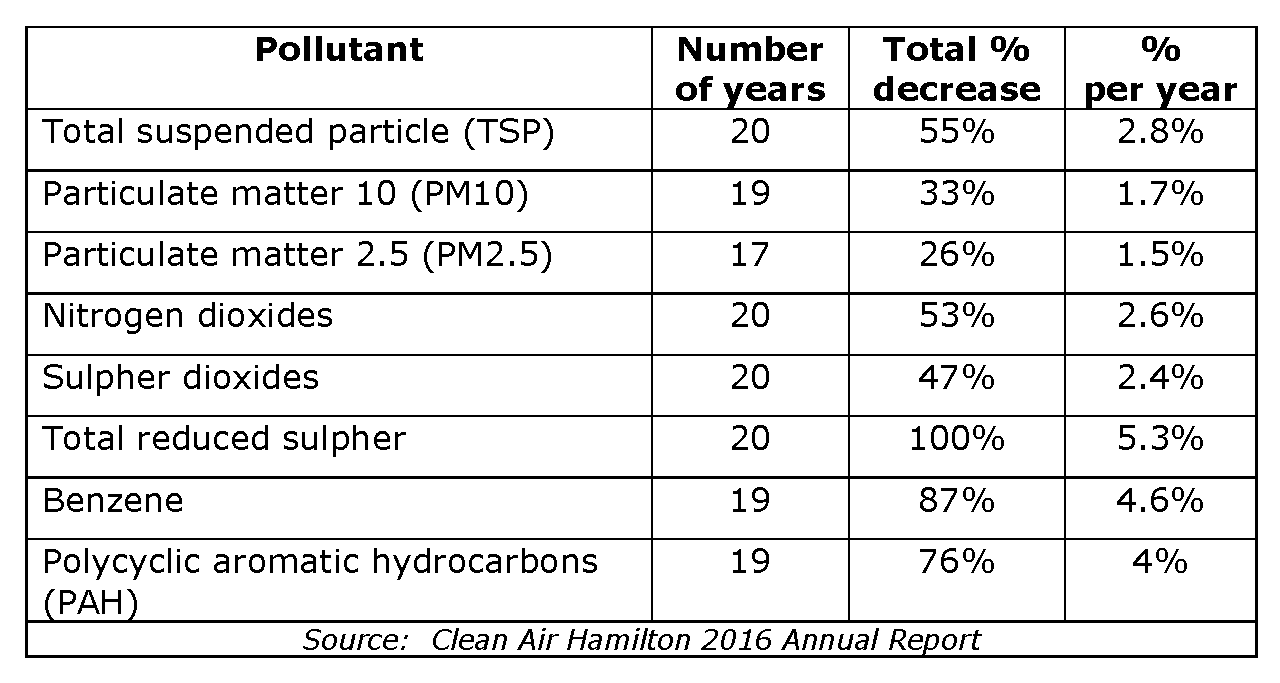 Mobile air quality monitoring initiatives and enhanced stationary monitoring work have confirmed large variations between different areas of Hamilton. Clean Air Hamilton found that the highest risk to health from pollutants occurred on and near 400-series highways. There, the risk was double that of the city’s average. Neighbourhoods with higher than average risk to health were predominantly in the north and northeast parts of the city3.

Polycyclic aromatic hydrocarbons (PAH), including the especially potent benzo(a)pyrene, are carcinogenic by-products of the industrial coking process. In spite of a 76% drop over the past 19 years, there are still day-to-day variations that exceed Ministry guidelines for certain Hamilton neighbourhoods – especially the Hamilton Beach Strip, due to the prevailing winds4.

Smog days or the similar Special Air Quality Advisories are another way to measure air pollution. The number of these events has fallen dramatically in Hamilton since their peak between 2002-5, when there was an average of 18 smog days annually. Since 2014, Hamilton has not had one Special Air Quality Advisory or Smog day5. Analysts suggest this is largely due to the closure of coal-fired power plants in Ontario and the United States midwest, as well as to the closure of local industrial plants6.

Greenhouse gas emissions, — the release of carbon dioxide, methane, and other gases — are the leading contributor to climate change. In Hamilton in 2015, they fell to the targeted 18.5 million tonnes per year from 19.3 million tonnes in 2014, but were still higher than the low of 16.5 million tonnes in 2012. The leading sources of emissions in Hamilton are industry (83%), transportation (6%), residential (5%), commercial (4%), waste, water, and agriculture (1% each). Since 2006, all sources of emission, except transportation, have fallen7.

Due to industrial emissions, Hamilton has double the per capita greenhouse gas emissions (15 tonnes per capita) of other Greater Toronto Hamilton Area cities: Toronto (5.5), Peel (8), York (6), Durham (7), and Halton (5.5)8.

The Hamilton Harbour Remedial Action Plan’s target for public beaches to be open for swimming is 80% of days from Victoria Day to Labour Day. The three Lake Ontario beaches (Beach Boulevard, Van Wagner’s, and Confederation Park) exceeded this target and in 2017 were open over 92% of days, up from 85% in 2010. After years of poor water quality primarily due to waterfowl contamination, Bayfront Beach and Pier 4 beaches were closed to swimmers for the entire 2017 season9.

Having an adequate tree canopy in urban areas is not only important for animals, but can also have a positive effect on physical and mental health, offer environmental benefits like CO2 reduction and economic benefits such as increased property values. In 2009, the last time the tree canopy was measured in Hamilton, it was 19%10. The city staff have set a target of 30% by the year 2030.