As of the 2016 census, 88% of Hamiltonians, age 25-64, have completed at least a high school diploma, up from 84% in 2006, but still lower than the provincial average of 90%1. School boards are now able to track what percentage of students complete their OSSD within five years of starting Grade 9. Just over 86% of HWCDSB and 79% of HWDSB students finish within five years; the provincial average is 86.5%2. In general, girls have higher completion rates than boys, and overall graduation rates vary across schools.

The percentage of Hamiltonians who have completed either a post-secondary certificate, trades program, diploma or degree rose to 62% in 2016 from 58% in 2006, but was lower than the provincial average of 65%3. One quarter of Hamiltonians had a university degree, lower than the provincial average of 32%. Hamilton is slightly higher than provincial average (7% vs 6%) for trades program completion. Similar to high school completion, women achieve university degrees at higher rates than men (27% compared to 22%)4. The Spectator’s All About Us showed great differences between neighbourhoods: in seven neighbourhoods, over 80% of residents, age 25-64, had completed some post-secondary education, while in another nine neighbourhoods, less than 40% residents had done so. Find the full map at this link: All About Us.

Hamilton students are tested in Grades 3, 6, and 9 by the “EQAO”, which measures reading, writing, and math performance against provincial standards5. The HWCDSB consistently achieves higher than provincial averages, with one exception in 2016-2017: Grade 6 math and Grade 9 applied math. The HWDSB is usually just under the provincial average, but has declined in seven of the nine test areas over the past five years. In addition, 38% of its Grade 6 students met the standard in math vs 50% provincially. There is a great variation between schools in both boards: 13 elementary schools had less than 20% of Grade 6 students meet provincial math standards, while six schools had more than 75% meet the standard.

For full results, or to search EQAO scores for individual schools, visit the EQAO website.

In 2015, Hamilton children had an overall vulnerability of 31%, which was similar to prior years, but was improved in Language and Cognitive Development and Communication Skills and General Knowledge. Vulnerability was higher in Emotional Maturity, and slightly higher in Physical Health and Well-being. After a decade of being above the provincial averages, Hamilton children pulled within one percentage point: 30.7% compared to 29.4%6. 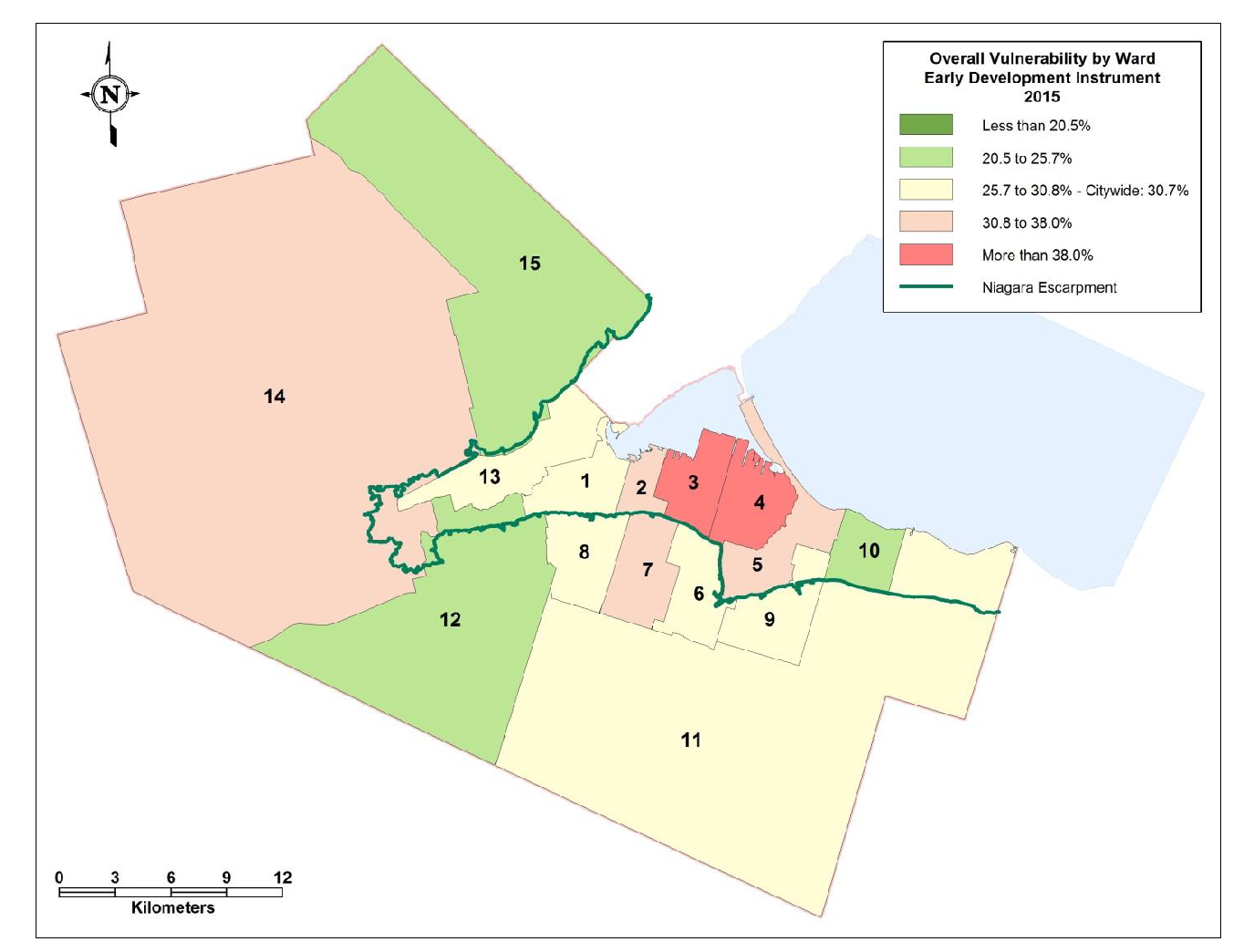 The EDI varies greatly by neighbourhood and ward: Wards 3 and 4 have the highest rates of overall vulnerability, at 47% and 40% respectively, while Wards 10,12, and 15 were below 25%. Past research has shown the strongest factors that influence vulnerability are7: